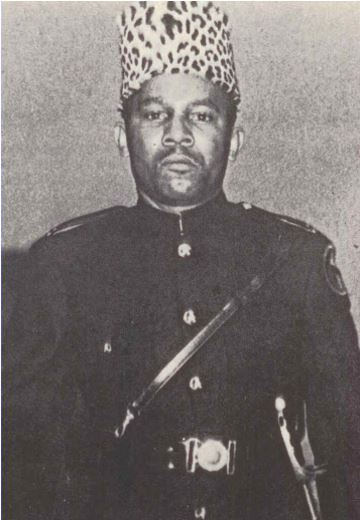 He was born in 1913 in the Dominican Republic but operated in Harlem from 1929 until his death in 1966. For three decades -1940’s, 1950’s, and 1960’s – he became the single most important individual responsible for keeping the works of Marcus Garvey alive.

Carlos A. Cooks is the ideological son of Marcus Garvey. He organized a “Buy Black” campaign in the 1930s to advance community building; he launched annual Garvey Parades in the 1940s and promoted Black female beauty and natural hairstyles. His argument for mental liberation was grounded in his work with African leaders fighting for territorial decolonization. He promoted a convention in 1959 to eliminate the word “Negro” and to replace it with “Black” and “African.” In sum, Cooks organized economic and cultural activities that became part of the Black Power Movement. His works influenced a new generation of leaders that included Malcolm X and Stokely Carmichael. He avoided publicity; he was unconcerned with having his name in the press. He seems to have taken the position that if one understood

Garvey, then one would understand his own position. Cooks’ selfless commitment explains the reason why he remains unfamiliar. Cooks’ reluctance to court media attention begins from his formative years. He was reminded in New York of a bond of secrecy that goes back before his migration from the Dominican Republic. Born in the eastern city of San Pedro de Macoris, his career in Harlem was shaped by the story of this city as much as it was linked to the initiatives of his father,
James Cooks.

In the 1880s, the sugar industry was established in San Pedro. At the center of production was the exploitation of immigrant workers from many of the Caribbean Islands. James Cooks hailed from St. Martin in the 1890s and rather than falling prey to the giant industry, he gained success as an entrepreneur. In the next century, he was reporting ownership of twelve houses and several other businesses in San Pedro. In this city, he raised his four children with his wife Alice. A father who invested in business but was equally concerned with helping the workers marked the early memories of the son. Cooks Sr. helped to maintain mutual aid and other societies; Carlos was inducted as a child in a Haitian secret society that called him to service and secrecy. However, by 1916, the story of San Pedro was shifting. Haiti and the Dominican Republic came under the occupation of the United States military, and Haitian workers gravitated to the interior of the Dominican Republic and the sugar industry, where the common conditions of exploitation influenced strong bonds among the increasingly diverse community of Black people.

In response to detrimental conditions, workers were seeking to organize, and turned to Garveyism in their reading of the Negro World, now in circulation. In 1919, San Pedro became the center and held branch of the UNIA, Chapter No. 26. This center was also known as

Liberty Hall; the organization was housed in one of the many buildings owned by James Cooks. His involvement along with that of others resulted in his arrest and persecution by the American military. In 1922, James and some members of his family resettled in New York, leaving Carlos in the care of relatives in San Pedro. Carlos remained in
the Caribbean for another seven years further immersing himself into the UNIA.

When Carlos arrived in Harlem in 1929, he was ready to assume a role in the Garvey movement. The rest of his family in New York stayed away from this organization, which the law had disliked; but the boy of merely sixteen years of age engaged in activities that were to place him in the Harlem spotlight; he also became a street speaker. In 1932, he became an officer upon the recommendation of Garvey; six years later, in 1938, he headed the UNIA Advance Division earning the name, the
“Undaunted”

When Italy’s Benito Mussolini ordered the invasion of Ethiopia in 1935, Cooks responded by recruiting people in the community to expel Italian economic “encroachment” in Harlem. The police identified him as the ringleader of a group that attacked white-controlled businesses, which it is claimed, promoted the prostitution of Black women. He then launched the famous “‘Buy Black’ campaign” to advance Black commerce and financial independence. By the end of the decade, the
police increased its vigilance over Cooks, as he was now becoming an independent voice.

I n 1943, Cooks was forced to suspend his work with the ANPM when he was drafted to fight in World War II. This enlistment came after his public mockery of the war; he was found guilty of sedition. The incident was publicized in a New York Times piece subtitled: “Alien Dominican Gets 90 Days for Creating Disorder.” Cooks returned from the war in 1946 and with no signs of rehabilitation. After collaborating with a newly formed organization of Benjamin Gibbons and James Lawson, Cooks restarted his ANPM in 1949 and continued unapologetically with Marcus Garvey’s vision.