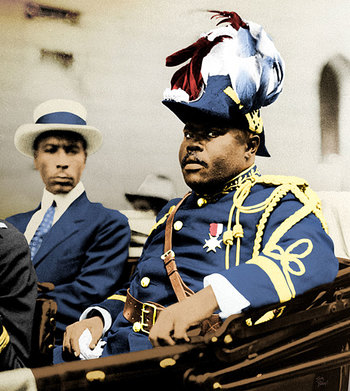 The time has come for the Black man to forget and cast behind him his hero worship and adoration of other races, and to start out immediately to create and emulate heroes of his own. We must canonize our own martyrs and elevate to positions of fame and honor Black men and women who have made their distinct contributions to our racial history. Sojourner Truth is worthy of sainthood alongside of Joan of Arc.

Paul Bogle and George William Gordon are entitled to the halo of martyrdom with no less glory than that of the martyrs of any other race. Jean Jacques Dessalines’ and Moshesh’s brilliancy as soldiers and statesmen outshone that of a Cromwell, Napoleon, or Washington: hence they are entitled to the highest place as heroes among men. Africa has produced countless numbers of men and women, in war and in peace, whose lustre and bravery outshines that of any other people. Then why not see good and perfection in ourselves? We must inspire a literature and promulgate a doctrine of our own without any apologies to the powers that be. The right is the Blackman’s and Africa’s. Let contrary sentiments and cross opinions go to the winds. Oppositions to Race Independence is the weapon of the enemy to defeat the hopes of an unfortunate people. We are entitled to our own opinions and not obligated to or bound by the opinions of others….